Grasslands and dryland ecosystems are adapted to, and dependent upon, disturbances such as grazing and trampling.

Summary: Intense, short-duration trampling and dunging by grazing animals is a natural part of how ecosystems function in arid and seasonally dry environments. Removing grazers damages these ecosystems, which depend on disturbance by grazing animals to perform vital functions such as mulching soil and planting seeds. Intense trampling that mimics the effects of wild herds has proven effective at healing environmental damage in grasslands and deserts. 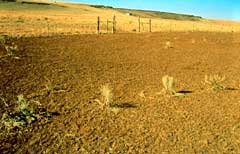 As a test of animal impact, this 2 ha (5 acre) test plot got repeatedly "nuked" with up to 1,000 cattle, followed by very long rest periods for grass recovery. 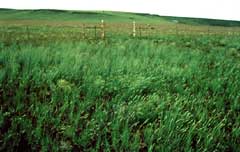 What is animal impact?

Animal impact is everything large animals physically do to land except graze. Animal impact includes dunging, urinating, trampling, rubbing, wallowing, salivating, etc. Mostly when people refer to animal impact, they mean dunging and trampling, which have the most beneficial effects on rangeland.

The world's grasslands are adapted to very high levels of animal impact produced by large herds of grazing animals. Migrating wildebeest and other grazers of Africa's Serengeti number millions of animals. Their concentrated trampling and dunging has maintained the grasslands for millions of years by breaking soil crusts, planting seeds, mulching the soil surface with trampled vegetation, and fertilizing the landscape.

Until recently, gigantic herds of grazing animals were common over much of the world. In the 19th century, some herds of bison (American buffalo) were estimated to number over 1 million animals. After a large herd came to drink, observers described the riverbank as "like a stockyard; not a blade of grass could be seen." But soon the grass soon came back, stronger than before.

Herds of millions of springbok, a type of antelope, migrated through South Africa's Karoo region until the end of the 19th century. In Zimbabwe, lechwe antelope formed herds several kilometers long as late as the 1960s. Early trappers' accounts of deer in U.S. Rocky Mountains suggest that these animals, today found only in small groups, once occurred in herds of 20,000 or more. Obviously all this trampling maintained grasslands, or we would have no grasslands today.

These are the same things you might do to help your lawn or garden grow, and they benefit wild plants, too.

High animal impact with short duration healed this section of the creek, photographed on the same day. On the EcoResults! website.

The beneficial effects of animal impact depend on having high impact for a short duration. In natural conditions, grazing animals stay tightly bunched to protect themselves from predators. They intensively graze, trample, dung, and urinate on a small area for a short period of time, then move on. They will not return until their dung and urine have been absorbed, which gives the grass time to regenerate.

Low impact for a long duration causes ecosystem damage, because plants and soils don't get a chance to recover.

To compare, imagine watering 1 horse for 365 days at the same spot on a river. The horse would make a trail, and the river bank would become a muddy, trampled mess.

Now imagine watering 365 horses there for 1 day. 365 horses would also make a trampled mess, but with 364 days to recover, the river bank would soon revegetate. The additional fertilizer would probably make the bank healthier than before.

Most negative effects of livestock on rangeland result from: 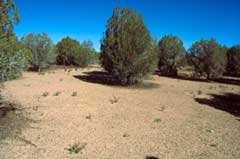 Lack of grazing damages landscapes that are adapted to it. Ungrazed since 1946, this former grassland is now over 90% bare ground. Drake Exclosure, Arizona. 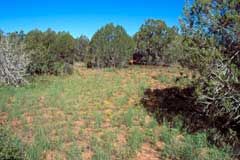 Some animal impact is better than no animal impact. This land just outside the Drake Exclosure is grazed by cattle. It is still recovering from decades of continuous low-density grazing.

Heavy animal impact is even better. This area near a stock tank gets extra trampling when cattle come to drink. Long recovery periods ensure ample grass growth. Same area as the photos above, photographed on the same day.

Parts of Zimbabwe get 1000 mm (40 inches) of rain per year, and can grow grass 2-3 meters (7-10 feet) tall. Since an 8-month dry season kills most decay organisms in the soil, these areas are extremely dependent on grazers to knock down, trample, digest, and compost standing vegetation before the next growing season. Otherwise the standing plant material shades (and can kill) grasses. (Most grasses have their growth points at the base of the plant to keep grazers from biting them.)

Arid and cold steppe grasslands accumulate standing growth much more slowly, but this material can still shade and eventually kill grasses if not removed by periodic grazing and trampling. Trampled plant matter on the soil surface is extremely important in these environments to prevent erosion and protect the soil surface from moisture loss.

When grazing animals are removed, grazing-dependent ecosystems suffer damage, often very rapidly. Most of Nevada, an arid state in the western U.S., was grassland less than 100 years ago. Today virtually all of this land is desert.

Most grasslands, bushlands, and deserts are adapted to and can benefit from high animal impact. In fact, animal impact is the most effective way known to restore damaged and desertified land in arid and seasonally dry (brittle) areas.
Tony & Jerrie Tipton

Reseeding failed to revegetate this former gold mine, which had no topsoil.

After broadcasting seed, cattle were fed hay on the site to add organic matter and produce high animal impact.

The restored land outperformed some nearby hayfields. On EcoResults! website.

Animal impact can revegetate even "impossible" sites where no topsoil remains. By trampling seeds, hay, and dung into the soil, heavy animals such as cattle and horses plant seeds, add organic matter and soil-building microbes to the soil, mulch the soil surface, and help it capture more rainfall so seeds can germinate and thrive. Learn more.