Index of articles and links

In an era of farm and ranch failures, those who manage holistically can often manage to increase stocking and forage production, cut costs, and increase their profit. Some are even turning desert back into grass.

Pastured poultry (articles) such as free-range chickens are one of today's most profitable small-farm enterprises. 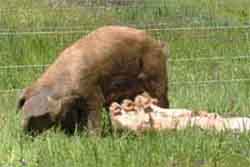 This sow gets a bit of grain to maintain her body condition while nursing. Otherwise she lives on pasture year-round. Don't try this with hogs bred for confinement feeding; they'll die on grass. Article

The farm that came to be. Joel Huesby's account of major changes near Walla Walla, Washington.

Burrows Stewardship Day 2002: A day of workshops and ranch tours held yearly in northern California. This year's topics: Advantages of perennial grasses, how to establish them, goats for weed control, and multi-species grazing that includes pastured hogs. Lots of photos.

Establishing perennial grasses in dryland areas by rancher Bill Burrows. In a dry summer climate like northern California's, perennial grasses grow 3-10 times more forage than annuals, but are hard get started. Bill discusses several ways to do it.

Improving a small acreage with three horses by Peter Donovan. Near Ukiah in northern California (USA), Dick and Diane Knox have improved ecosystem function on their small acreage by managing their horses' grazing. Patterns of Choice, 2000.

Dennis Wobeser: from feedyard to grass farming by Dennis Wobeser and Peter Donovan. How and why the 1999 winner of Canada's Emerald Award switched to grass in cold Alberta, Canada. Patterns of Choice., 2001.

The New Agriculture by Allan Savory. Previous civilizations failed because agriculture damaged the ecosystem functions on which every civilization ultimately depends. What ours must do to survive. A keynote speech from the Agriculture Vision 2000 Conference in Kansas. Patterns of Choice, 2000.

Oregon Country Beef: an interview with Doc and Connie Hatfield by Peter Donovan. How and why Oregon Country Beef (a marketing cooperative that sells hormone- and antibiotic-free beef to natural food supermarkets) began and what keeps it going. Patterns of Choice, 2000.

Oregon Country Beef's Grazewell Principles by Jack Southworth. What Oregon Country Beef (a marketing cooperative that sells hormone- and antibiotic-free beef to natural food supermarkets) strives for on the land.

Diversifying for profit, pleasure, and production by Joel Salatin. A gifted Virginia farmer, educator, and marketer tells how. Patterns of Choice., 1998.

Utah's Deseret Ranch increases environmental quality and profit by Gregg Simonds. How improving the people dynamic can improve both ecological and economic conditions. Patterns of Choice, 1998.

Learning as a group: the Rogues of Baker County, Oregon by Peter Donovan. This dynamic group of Baker County ranchers learns holistic management together. A shorter version of the above. The Capital Press, 1997.

A conversation with Jack Southworth by Jack Southworth and Peter Donovan. A fourth-generation rancher in Seneca, Oregon notes significant changes resulting from his practice of holistic management. The Wallowa County Chieftain, 1995.

A different philosophy in Seneca, Oregon by Jack Southworth and Peter Donovan. A shorter version of the above. Capital Press, 1996.

Beyond partial management by Marcos Gimenez-Zapiola. An Argentinian rancher elegantly summarizes some of the basics of holistic management, including the importance of understanding the whole. The Holistic Resource Management quarterly, 1997.

Biodiversity: where's the beef? by Peter Donovan. The beef industry as a whole is often viewed negatively by environmentalists and consumers. Can they take a wider view? Published 1996 in PCC Sound Consumer, 1996.

Paradigm shift at the Broughton Land Company by Doug Warnock. By changing to a later calving date, manager Gene Patton benefited ecology, quality of life, and economics. Patterns of Choice, 1997.