A visit with Tony Tipton 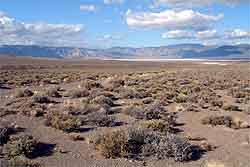 In the 1870s, Teels Marsh was a wetland with trees, ducks, and deer, surrounded by a grassy valley where people cut hay and wintered livestock. Today the marsh is an alkali flat surrounded by desert. Tony and Jerrie Tipton want to restore it.

MINERAL COUNTY, NEVADA -- When I visited him in 1999, Tony Tipton shared his idea of rehabilitating large portions of a 250,000-acre catchment around Teels Marsh, Nevada, about 30 miles southwest of Hawthorne.

The large playa basin around the former mining town of Marietta is managed by the Bureau of Land Management. Not too long ago, Teels Marsh had wetland vegetation, trees, duck hunting, and mule deer. People cut hay here, and grazed livestock in the vicinity.

Today there is very little ground cover, and Teels Marsh is a tiny remnant wetland near a spring, surrounded by a vast alkali flat. Feral burros browse on widely spaced four-wing saltbush and ephedra. The area is designated as the Marietta Basin Wild Burro Range (current population is about 65 head). The number of commercial livestock permitted to graze has been steadily reduced by the BLM, and it is now zero.

"Ninety percent of our plants are old or dying," Tipton said. "Rest is killing us. Eighty-five to 90 percent of the ground is bare. All of our resources are in a downward trend. Plant spacing is getting further apart."

Tiptons built their reputation revegetating "impossible" sites like this old gold mine, where conventional techniques failed.

This region of east central Nevada typically gets four to six inches of precipitation per year. However, "water is not the weak link. Of what we get, about 90 percent evaporates, and only 3 to 7 percent goes to plants and underground storage. How can we lower evaporation rates, how can we get more into the soil?"

These are not popular questions. There is a visionary gleam in Tipton's eye as his words are snatched by the wind across the enormous, largely barren playa. "A riparian area is just the offspring of a good watershed. If we could get the water cycle functioning again, these alkali spots would turn boggy."

Early-day hydrology, he says, viewed the whole, but "hydrology nowadays is not concerned with plants."

"This valley's groundwater has not been lowered by pumping. It will take lots of animals to maintain it."

Tony and Jerrie Tipton have had considerable success revegetating mine tailings with straw, hay, and cattle. "We're trying to get out of the grazing mode and get into resource management. But we've lost money." Animal performance and conception rates tended to be an issue. "The financial is down, but the knowledge is up."

For several years the Tiptons have invited interested people in show-me trips to various sites. "Everybody learns and everybody observes. The few plants that are healthy have been grazed." Because of the Tiptons' success in revegetating mine tailings, a group has coalesced around the Teels Marsh proposal, and have included in the project's goal: 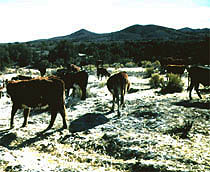 A 1997 trial treatment in progress near Cedar Mountain, Nevada. The area is badly gullied and eroded, mostly bare ground that produces only 50 lbs. of forage per acre (45 kg per ha). 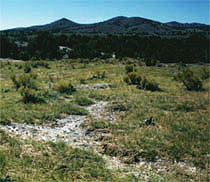 In order to restore biological activity in the soil, and thus improve the water cycle and other ecosystem processes, the Tiptons are proposing a mobile feedlot, with at least 2500 cattle. "In order to get seedlings, heavy impact is required. There's lots of good protein out here, but not a lot of energy." Sixty percent of the cattle's nutrition would be supplied by alfalfa hay and grain, and a water system would be built.

"Bacteria, like us, are 85 percent water. Bacteria and fungi, which are very low in numbers here now, hold the water."

"How well the cow does is dependent on the food source for her bacteria. The soil is basically the same -- we need to feed the microorganisms. Everything will follow -- in fact you can't keep it from functioning."

The cost of treating 20,000 acres per year with heavy impact and imports of feed and water is projected to be in the millions of dollars.

What has he learned? "I have underestimated people's resistance to change."

Like the prospectors of a generation before whose burros follow our pickup across the basin, Tipton is attuned to another dimension of the landscape than casually meets the eye. "In 1872, the U.S. Geological Survey showed much of this basin as a marshy meadow. The memory of a landscape slips away." He questions the old-timers and he questions the way things appear to be.