Gardeners of Eden: Rediscovering Our Importance to Nature by Dan Dagget 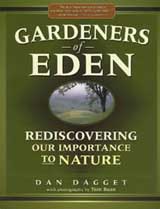 Gardeners of Eden: Rediscovering Our Importance to Nature by Dan Dagget. Called "the most important conservation manifesto since Aldo Leopold's Land Ethic." Buy on Amazon, Booksense, or Half.com.

In his new book, Dan Dagget describes a new conflict over management of western resources. Instead of the tired old set-piece of preservation versus extraction, we now have a fresh, new struggle between Leave-It-Aloners — as Dagget terms those who believe that the best thing for humans to do with land is to leave it alone and let nature take its course — and the Lost Tribe, who are busy reversing land degradation through use.

Conflict, writes Dagget, is one of the major economic sectors to emerge from America's public lands. And Dagget himself is definitely a player. In the 1990s, he broke ranks with the advocacy-oriented Sierra Club on the grounds that results on the land counted more than prescriptions or beliefs. He began to follow the experiments of people such as Tony and Jerrie Tipton in Nevada, who were restoring grasslands on sterile, salt-encrusted mine tailings with cattle and hay where conventional prescriptions of technology and rest from grazing had failed utterly.

Reseeding failed to revegetate this former gold mine, which had no topsoil.

After broadcasting seed, cattle were fed hay on the site to add organic matter and produce high animal impact.

The restored land outperformed some nearby hayfields. On EcoResults! website.

Using cattle to restore land, Dagget found, collided with what people "knew": that cattle could not restore land, they invariably degraded it. Therefore the grassland atop the mine tailings was invisible or irrelevant. It was, he says, like showing pictures of dog tricks to a cat fanatic.

The book is a wide-ranging and rapid survey of the remarkable achievements of some the Lost Tribers, which will be engaging and hopeful news to most. The theme running through is that human management has been crucial factor in creating many of the environments that we mostly now regard as natural. By ignoring or denying our participation in the landscape, we have become aliens — but in following the examples of the Lost Tribe, there are substantial opportunities to change our attitudes and behaviors, and become more native to our landscapes.

These are powerful and deep issues. Dagget's Lost Tribers are practicing a kind of interdependence that offers tremendous opportunities to regenerate degraded lands and communities — opportunities that didn't exist in the old set-piece between extraction and preservation.

An understanding of basic ecosystem processes underlies much of what the Lost Tribers have accomplished, and many of Dagget's readers might benefit from a basic description of the water cycle, for example, or how the biological carbon cycle operates differently in moist environments than in seasonally arid ones. But his book, outlining as it does this new conflict emerging from the old, stale one, will be a powerful creative force for change. Congratulations Dan!