Summary: Pasture grazed and then allowed to rest 5 weeks showed better water infiltration than pasture rested either for shorter periods or for a year.

These are the results of a test I did in 21 June of 1997. A flash rain went through an area where I had four pastures of similar topography and soil. We got 2" (50 mm) of rain in 30 minutes. 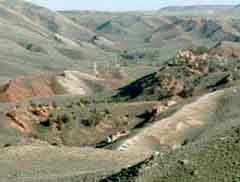 Twin Creek Ranch near Lander, Wyoming is cold steppe with 13" (330 mm) yearly precipitation and magnificent vistas. Brittleness is around 7.

Two inches is significant in our 13" (330 mm) precipitation area, where most moisture falls in early spring and early autumn. If we don't have a good water cycle to hold the moisture in the root zone until the growing season, we are in trouble.

I had been told that 1" of rain will saturate 7" of soil. Three days after the rain, I dug down to see how much went in the ground. As you can tell by now, this was not a scientific, peer reviewed study, just a curious cowboy study.

I selected my dig sites with the idea that I wanted the water to be on the move as soon as it contacted the earth, so it wouldn't simply sit until it eventually soaked in. I also wanted sites uninfluenced by water running onto them from somewhere else. The sites I picked met these criteria:

Litter dams are plant material on the soil that can catch water and slow its flow across slopes. Well-managed livestock trample lots of litter onto the ground, which protects the soil surface.

1200 cow-calf pairs grazed Woolery Draw for 7 days on the last week of June in 1996. 960 yearling steers grazed the other pastures for periods ranging from 6 to 19 days.

These results show that animal impact and grazing are clearly important to the water cycle. But rest and recovery also improve water cycle effectiveness.