The following excerpts are from Karl Kupers' presentation at the third annual Washington State University/Kellogg Holistic Management Project's statewide conference in Spokane in February 1999. Phil Crawford, then director of WSU's Center for Sustaining Ag and Natural Resources, asked Kupers, "I was thinking about the role of the university. We and others have had a lot to do with the current system: all the work that we had put into wheat, and all the work that we had not put into these other crops. Is there a role for the university in all of this?"

Everybody thinks that because we're wheat growers, that we are just monocultural. Monoculturalism spreads much beyond the individual producer. We have an infrastructure in the Pacific Northwest that is totally monoculture, because that's all we grew--they became monocultural. And efficiency was the key word in the 1970s and '80s. I think producers can change much quicker than the infrastructure because of the cost.

In addition, the university became very monocultural. The research that's gone on at WSU has led us to be fat, dumb, and happy. They've done a damn good job of it. If they'd have failed at their mission, we would have still been raising 35-bushel winter wheat (then we'd have been at this a long time ago). But because of their efficiency, related to our proficiency, we didn't need to do any change.

Relative to WSU, it's my hope that they understand their need to be risky. They felt that their risk was in stepping away from the way they've been doing things, stepping away from wheat research. But if you look out there, you'll see that wheat research is leading us down this path that put us into this position we're at today, with wheat prices at $2 a bushel, and you've got piles out there.

The biggest change the university could make would be to accept privately funded research--Monsanto research. The Dakota Lakes Research Farm was developed because a group of farmers were so disgruntled with their university's research that they bought a piece of land and hired Dwayne Beck away from the university —he's worked it out so that he's still with them —and they said, take us to the future. They were so frustrated that the university wasn't doing it. And he did. Many researchers discount Dwayne Beck because he doesn't do it in the perfect scientific model. But what he does do, is he's a farmer. He is making farm-sized research decisions. His Dakota Lakes farm is funded by its production.

What a grand scheme for me to understand, as a grower, if research is really working! I don't need to have a 20-year study, with all the bells and whistles, on a 4-by-4-foot plot, when I've got a guy over here who's doing it farm-sized, farm-sized equipment, everything, and he's making a profit.

On-farm collaborative research is vital, and may be the only way to change the university. It allows the transition from incremental, highly charged, tenure-gathering research, to an applicable, quick, necessary farm research. The Wilke farm is implementing it. It's small, but it's farm size. We have six collaborators who are replicating it on-farm in a 30-mile radius. Now that is strength. The quickest way you're going to get farmers to change is to see other farmers succeed.

Fifteen years ago, I'm not sure that my maturity level would have enabled me [to make these kinds of changes]. When you go through change, especially in agriculture, the pressures from outside are so immense, even nationwide and global, that's there's no way you can withstand them unless you're at a certain level of maturity. 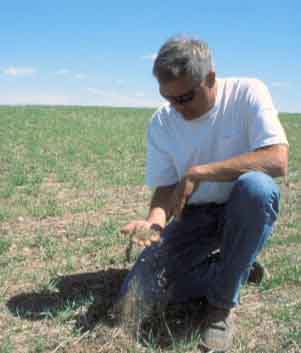 Change is necessary as we move toward sustainable agriculture. I believe you must be a futurist if you're going to be an early innovator. The trick is to see the future before it arrives. The future must become just as vivid and real as the present and past. If you study the future, acceptance of change in agriculture is your only conclusion.

Change doesn't always come in a planned and positive way. You want to be open to change--recognize that it can come from anywhere, any time. Don't look at it as a negative--look at it as a potential positive, and let it happen.

For more information on Karl Kupers and the transition to no-till, see