Summary: Three related stories by three South African holistic managers. Introduction to the Karoo and its surprising history, restoring grass to a family farm from 1973 to present, and restoring an area with zero carrying capacity. 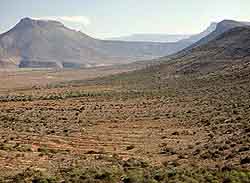 The Karoo is an arid region that covers about one-third of South Africa. A harsh, arid semi-desert, its name derives from the Khoisan word for thirst.

I visited the area for the first time in March 2001, noting many areas of bare ground but not much wildlife or domestic stock, and deep gullies where soil had eroded. In all it was a bleak picture.

In Graaff-Reinet, I visited the Kroon family's farm. While the Kroons use most of the same tools as their neighbours -- livestock, fence wire, water points -- the way they use them is different. By making decisions toward what they want, testing those decisions and their results, and correcting course when needed, they are helping their land to heal. 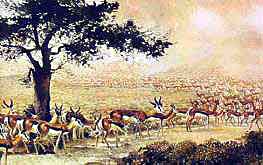 The annual springbok migration, painted in the 1800s. A single herd could number millions of animals.

The Karoo was once home to one of the world's great wildlife marvels, the springbok migration. Stories tell of millions of these antelope filling an area as far as the eye could see as they swept through it. Settlers went on massive hunting sprees, shooting down the springbok by the thousands. Mr Cronwright- Shreiner described a scene after one slaughter:

The whole veld was damaged: it was hardly possible to put one's foot down in that vast extent of country without treading on the spoor of springbok, and the Karoo bushes were torn and broken by their sharp hooves. We passed several outspans where the hunters had encamped for days -- deserted camps which were marked by ash heaps and charred bones and the remains of bundles of forage; while offal, heads and lower portions of the legs of buck lay about to such an extent to be quite disagreeable.

The year 1896 saw the last of the great migrations. A Mr Gert Van der Merwe describes it:

At last the sound of a faint drumming could be heard. The cloud of dust was dense and enormous, and the front rank of the springbok, running faster than galloping horses could be seen. They were in such numbers that I found the sight frightening. I could see a front line of buck at least three miles long but could not estimate the depth. All night long the buck passed. The morning air was clear, the day bright. Then I saw the landscape, which had been covered with trees of a fair size were gaunt stubs and bare branches. The buck had brushed off the herbage in their passing and splintered the young trees so they would not grow again.

What a sight this must have been! Both writers emphasize the landscape "destruction" that took place with the passing of the great herds. Yet that very destruction maintained the grass. Millions of hooves broke capped surfaces, allowing dormant grass seeds to germinate. Millions of dung pats provided fertilizer. And the grass came back, year after year.

In a similar way, the Kroons have employed what at first glance looks like destruction to restore their landscape. It is for you the reader to draw your own conclusion as you examine their story.

References: The Conservationists and the Killers by John Pringle Stories of the Trekbokke by Lawrence H Green

This project took place on my farm Frijnsfontein, which lies about 20 km from Klipdrift. This particular area sits atop a mountain and averages over 500 mm (20 inches) of rain yearly.
Norman Kroon 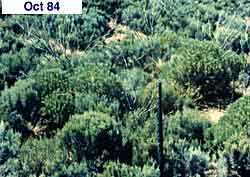 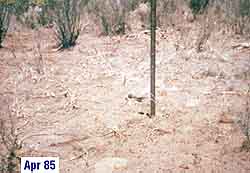 April 1985. Harpuis bush trampled down by animal impact, leaving litter on the ground, after Lucerne bales were thrown into the area. This is the only time we used an attractant. As yet no palatable species are visible.
Norman Kroon 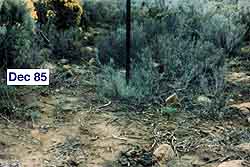 December 1985. The beginning of the improvement is showing with the growth of Themeda (Rooigras) at the foot of the iron standard. This is an indigenous grass with high grazing value.
Norman Kroon 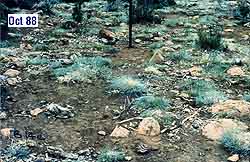 October 1988. Several clumps of Themeda are now visible. For the first time animals have a reason for grazing this area.
Norman Kroon 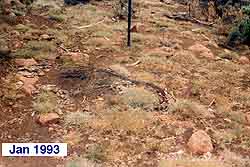 April 1995. Rapid progress. The dropper points to the triangular stone that was visible in the other pictures but is now hidden by grass.

This area was formerly burnt on a regular basis to control the Harpuis. The influx of grass weakened the bush, an insect attacked it, and many plants died. It is no longer a "problem" invader plant. 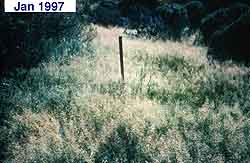 A Short History of Klipdrift

My family's farm Klipdrift lies outside Graaff-Reinet, South Africa. Its 5,600 ha (13,800 acres) initially had only 6 paddocks, all of which were probably continuously grazed until my dad Malcolm and uncle Norman started some initial fencing in the 1950s and added another 10 paddocks. We are in a 330 mm (13") rainfall area. Rain can happen any time of the year, and is very erratic. The dominant veld type in the area at the moment is Karoo bush.

In about 1966 my parents were introduced to Allan Savory. Our farm in South West Africa (Namibia) was being expropriated by the government and we needed an independent ecologist to evaluate our property. Allan Savory was the man. It was following this that we started with the grazing management principles that form the foundation of what is now Holistic Management.

After some experience in planning the "wagon wheel" fencing layout in South West Africa (Namibia) my dad then fenced Klipdrift into 50 paddocks in 1973/74. There were approximately 12 paddocks per flock, grazing each paddock for 5-7 days at a time allowing 60-70 days recovery.

The initial response resulting from the rotational grazing was quite phenomenal. This new management coupled with a series of good seasons changed the look of Klipdrift quite a bit. My folks even found a Cenchrus ciliaris (blue buffalo grass) plant, which created quite a bit of excitement.

My dad passed away in 1976, which led to my mom having to hire a manager to help run the operation. The managers subdivided some of the cells creating two 24 camp rotations and one 19 camp rotation. Although the infrastructure was quite good, the managers lacked a real understanding of the basic principles and the progress stagnated. The main reason for stagnation was probably due to inflexibility and insufficient planning.

After the last manager left, my brother Roland and I were in charge of doing the grazing planning. This we did during our vacations. Although this led to some sort of planning it was still very rigid, and we were not charmed when Mom deviated from our learned plan. All this time I don't think there was any drastic changes in our veld, although I don't think it regressed at all. It was not until the early 1990's when we attended a Holistic Resource Management course in Namibia, facilitated by Allan Savory, that we in South Africa realized we were missing the boat.

Soon after that we attended an HRM course in Graaff-Reinet run by Argo and Mecki Rust from Namibia and we started implementing our newfound knowledge. Argo's dramatic photographs of what herd effect could achieve inspired us to start concentrating on creating herd effect and changing animal behavior. Electric fencing made implementing these ideas a lot easier. We introduced more cattle into our management. What a great tool they have proven to be in the Karoo where cattle aren't supposed to survive! With this change in management and breaking of paradigms we have managed to get our veld to really come alive.

Since 1993 we have consistently managed to run at least 30% more animals than our prescribed stocking rate and our veld is improving. There is a phenomenal increase in bulk, probably due to the increase in the grass component (a far cry from one buffalo grass plant in 1973). Our bare areas are disappearing, our gullies are getting shallower and the edges are not only rounded but are becoming vegetated. The gullies end up in "vleis" (hollows that hold water) and thus stop the potential runoff water from disappearing to the sea. Signs of insect life are abundant and dung beetles are everywhere.

The concept of the Holistic Goal has now helped clarify things for us as a family, and put things into perspective. We have learnt a lot about ourselves and each other. But our commitment to the ecological health of our land is what has driven us to achieve the results that are so evident in our monitoring photos.

One wonders where this is going to end. The early travelers used to speak of the Camdeboo area (which includes Graaff-Reinet) being covered in grass so high that it touched their stirrups as they rode through. I think we might just see that again some day soon.