Good management can create rapid recovery of severely desertified land without use of fertilizers, artificial plantings, or irrigation by harnessing a cost-effective biological force: livestock. Here on Kachana we use the cattle that damaged our land to heal it.

Danny Waser and I started managing Kachana in 1992. Before that it was part of another lease and totally unmanaged. Pastoralism had failed and nobody had any practical solutions for this rugged range country.

Until recently, swampy areas dotted the northern Kimberley countryside and acted at refuges for various rainforest species. Carbon dating of tree stumps in a local wetland indicate that 2400 years ago this area was a forest. Due to past human management, forest areas have now all but disappeared.

Each year, despite our efforts, Kachana alone still exports over one million tons of peat and silt out into the ocean. Unmanaged areas nearby make our losses seem insignificant. Aboriginal management would have maintained a reasonable level of health and stability in these swampy type areas.

Recovery of the Cockatoo Creek area

At one time, Cockatoo Creek supported rainforest. When I first saw the area in 1985 fires were already a regular occurrence. Stock was pounding and compacting the edges of the remaining wetland and pugging up the interior. By 1992 when we took over, gully-erosion had drained the area and even a fire would have been difficult to support. Approximately 20 head of cattle permanently patrolled the area, gradually damaging it further. 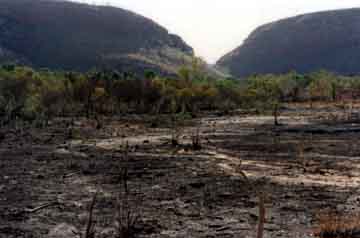 November 1992, end of the dry season. The result of compounding trends common to our region: 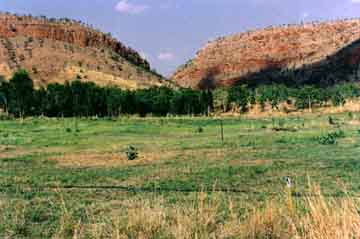 November 1997, end of the dry season, one month after third and last graze for the season. The close plant spacing (no bare ground) is due to changed management:

We have now learned that we can achieve similar results within the same time-frame without the use of irrigation or conventional planting.
Kachana Pastoral Company 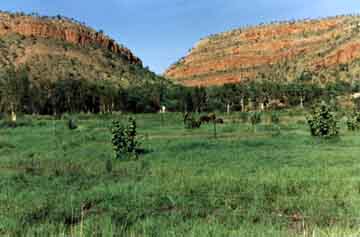 November 1998, same as above but three months after last graze. This area benefitted from 146 mm (5.7") of early rain. On similar areas where the ground was bare the same rainfall was non-effective and even took soil with it. 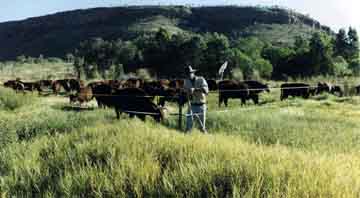 July 1999, mid-dry season, second graze for the season. The targeted use of a "working herd" for the associated pruning, mulching and fertilising effects. We find it cost-effective to harness an available biological force (livestock) to reclaim and/or enhance the health of landscapes:

We now produce vegetation faster than we can grow our herd. While we get our stock numbers up, we are tightly managing several model areas, which we are using to determine what is possible on various local land-types. In 2001, Cockatoo Creek grew 800-1100 stock-days of forage per hectare. Brittleness has decreased from approximately 9-10 in 1992 to approximately 5-6 today—still a long way from this area's original probable non-brittle 1-2.

Unfortunately, we will only be able to justify the necessary input for Kachana's overall recovery once we get official agency support.

I suspect that success in land restoration may depend a lot on how closely management's landscape goal is in line with what nature had designed in a particular area in the first place, especially in terms of fundamental eco-system function. My theory is that natural forces (the subtle ones as well as the more violent ones) will begin to work for us if we manage to get our landscape goal in tune with what nature was/is working towards. I have seen instances where in my opinion financial or operational constraint will drive the manager to work towards a goal that includes fighting the law of succession or some of the effects that result from previous management actions. Much will also depend on people's flexibility when reacting to unpredictable opportunities like storm, flood and the occasional fire. In relation to our goal, each of our management decisions can only take us in one of three directions: backwards, side-ways, or forward.

Kachana Pastoral Company promotes "enviro-tourism". Not tourism as a form of land use, but tourism as a vehicle to fund restorative land-care. Guests to Kachana pay a daily enviro-levy; this makes them partners in the challenge to restore and maintain vitality in the landscapes we all rely on.