I think most of you would accept the premise that our grasslands and croplands aren't as healthy as we'd like them to be. I'm going to refer to them as "degraded grasslands." All I mean is that there's room for improvement. Although I talk mainly of grasses, by "grassland" I mean complete communities of grasses, forbs (non-grasses) and the small organisms and microorganisms in the soil and plant litter. I sincerely believe, and have seen for myself, that we can restore and regenerate perennial grasslands with appropriate management practices.

You've all been trained in Holistic Management so you know what I mean by the "web of life." That is, the more component parts we have in an ecosystem, the better it functions. When a farm ecosystem is functioning properly, there is less for the farmer to do. Jobs such as weed control, fertiliser application and re-seeding, are provided as free services by natural ecosystem processes. The land manager's primary role is to help these processes function, and the rest will follow.

When we look at degraded grasslands, the first things we usually notice are that there are not many desirable perennial grasses, and there may be a lot of weeds. Being human, and guided by the advice of the times, we often make the simplistic assumption that removing the weeds and putting some better species there, will solve the problem. Decades of experience over several continents have demonstrated that the simplistic approach rarely works, and that the plant species we put there can only be productive if we maintain inputs such as fertiliser and weed control. That's because the interactions between the herbivores, plants and soil biota are out of balance, and we have to make up the difference from our bank accounts.

"Replacing" a degraded grassland with a newly sown grassland doesn't solve the underlying problem. We need to look a little further. Two of the key components to the web of life I mentioned in the beginning, which are missing from degraded grasslands are:

A healthy, animal-maintained (as opposed to fire-maintained) grassland contains enormous quantities of soil organic matter and even higher levels of microbial activity than occur in most forests. Furthermore, there shouldn't be any bare ground. How many truly healthy grasslands have you seen? It makes you realise we have along way to go. But don't despair, it can be done!

Perennial Australian native grasses are relatively slow to establish because they need to form microbial associations which assist them to obtain nutrients otherwise largely unavailable from the soil. These include associations with mycorrhizal fungi and several rhizosphere bacteria which produce phosphatase enzyme (releases phosphorus fixed in the soil) and free-living nitrogen fixing bacteria (which live in the rhizosphere and fix atmospheric nitrogen). These fungi and bacteria won't thrive in "dead" soils which are low in organic matter. The other point about beneficial microbes, both in the soil and on plant leaves (we often overlook the phyllosphere bacteria!) is that they synthesise many vitamins and plant growth hormones which you won't find in a commercial fertilizer mix.

Weeds on the other hand are often fast growing and simply use up whatever nutrients are available, robbing other plants. They are usually "takers" rather than "givers." Therefore, if soils have bare surfaces where weeds can establish, and low levels of organic matter which make it difficult for desirable perennial grasses to compete, what kind of grassland will result? An unproductive one!

The key to restoring perennial grasslands is therefore to restore microbial activity and nutrient cycling (not to mention water balance, energy flow and plant community dynamics) by increasing the level of soil organic matter. This could be achieved by adding 20 t/ha of chook manure, but by far the best way is through the use of the grazing animal, and I don't think I need to preach to the converted here. When grasses are rested to enable them to produce a good bulk of roots, and then grazed quickly and heavily, the roots are pruned so that the above and below-ground biomass of the plant are equalised. These pruned roots not only provide a food source for soil organisms, but they also aid soil structure, porosity, and water holding capacity, thereby improving the soil environment for all the living things we can't see, but on which our livelihood depends. When the grass plant grows new roots, these follow a different path to the old ones, so each time the roots are pruned and re-grow, more and more channels are opened in the soil, reducing soil compaction. 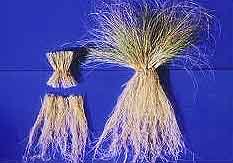 The roots of grasses form a mirror image of the tops. When the plant is grazed (left), it prunes its own roots. These then become new soil. Article

Of course the opposite happens if grasses are grazed continuously or grazed immediately after burning. These grasses have short, ineffective root systems and the grazing only leads to loss of organic matter, slowed nutrient cycling, loss of desirable species, soil compaction and bare ground. Remember that for grasses, the tops and roots always form a mirror image.

The other important aspect of high density grazing is trampling to lay litter on the soil surface, which has enormous benefits with respect to the infiltration of rainfall, reduced evaporation, stimulation of soil invertebrates such as earthworms, and changing the soil surface environment from one which favours the establishment of weeds to one which favours the establishment of desirable species. Burning, which reduces litter cover, has the opposite effect.

In essence, "restoring perennial grasslands" is all about "restoring soil condition." That is, create a favourable environment and the favourable species will follow.

If you don't believe they will, let's look at it the other way. Many weeds and plant diseases are from overseas and only started in Australia and New Zealand as a few seeds or spores. Yet we can almost guarantee they'll appear when we create an environment which suits them. Do you have to sow weed seeds in a cultivated paddock to get a good crop of weeds? And observe how quickly the pathogens multiply wherever soil conditions meet their requirements! Consider what happens when a new salinity patch develops. The first signs that something has changed are invariably the "indicator plants." These often appear on discrete patches of salinity which are many kilometres, sometimes hundreds of kilometres, apart. How do those plants get there?

Look at your stock holding paddocks and compare them to the areas outside. Often they look completely different. There is absolutely no doubt that the plant and microbial species present are a reflection of the environment, and that the environment can be markedly influenced by management practices.

The most detrimental factors for desirable perennial grasses and microbes are cultivation and/or inappropriate grazing management, which lead to bare ground and low levels of soil organic matter. Until we work on changing those factors, we're making life far more difficult than it needs to be.

Environmental change isn't always a continuum which can be reversed by going back the way we came. Sometimes a threshold has been crossed, and going back is extremely difficult. Thresholds include:

None of these factors prevent perennial grassland restoration, they just make it more difficult. That means we have to be more creative. To quote Einstein (courtesy Chris Henggeler, Kachana Station, NT):

"The significant problems we face cannot be solved at the same level of thinking we were at when we created them."

The ONLY way to reverse the problems listed above (with the exception of the polluted groundwater) is with the restoration of perennial grasslands and associated soil biota. The resultant grassland doesn't have to look like the original (what is "original" anyway, on geological time scales?), as long as it is healthy and functions in such a way as to provide landscape stability, healthy animals and happy people.

Christine Jones, Ph.D. is the founder of Carbon For Life Inc. Visit www.amazingcarbon.com

This article is a partial summary of a conference call (or Telebridge) hosted by Bruce and Suzie Ward in Australia on 11 May 2000. See http://www.holisticresults.com.au.