Much conventional thinking about the environment tends to separate "parts" of the same whole. In dealing with water problems, for example, we tend to focus on symptoms -- such as flooding, erosion, and riparian conditions -- rather than causes, which are almost always related to the function of the water cycle. 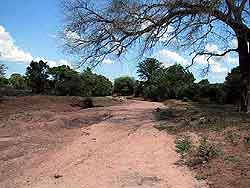 With mostly bare soil in its catchment, this river now only runs during flash floods following heavy rainfall. Droughts and floods are the norm.
Allan Savory 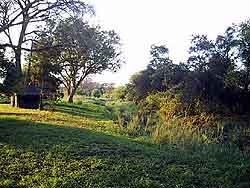 One of the basic processes of the ecosystem, the water cycle is often thought of only in climatic or large-scale terms.

Water constantly cycles around between bodies of water, the sky, and the earth. The cycle is powered by the sun. The most important factor in the way the water cycle works is the soil, particularly the soil surface -- where the earth meets the air.

Particularly in seasonally arid or brittle environments -- which cover two-thirds of the earth's land area -- soil cover is essential to the biodiversity (including biomass) and complexity that is needed for the soil to gain and store water, which is a basic necessity for all life.

Soil cover, root mass, organic matter, and aeration -- these are synonyms for an effective water cycle, where water is absorbed and retained as much as possible in the ground, and the surplus goes through plants (transpiration) and down into the water table.

When most precipitation runs off, and what moisture is able to penetrate the soil is quickly sucked back out through the drying of the bare soil surface, there is little moisture available to nourish plants or recharge the water table.

According to the Namibian government, 83 percent of precipitation that falls in Namibia evaporates directly from soil. The remaining 17 percent is runoff, or is transpired through plants. The evaporation from Namibia is equivalent in volume to the flow of the Columbia River at Portland, Oregon. In most of Nevada, Arizona, and New Mexico, the situation is similar.

This "river" of evaporation from soil, powered by solar energy plus capillary action or surface tension, is literally invisible. It is mentally invisible as well. Unlike the Columbia River, we cannot dam it, pipe it to fields for irrigation, generate electricity from it, transport barges full of grain on it, fish in it, windsurf on it, or litigate over the water rights.

Floods start as single drops running off the ground or released from the soil. Record rainfall is usually cited as a cause of severe flooding in recent years. What if the land, the soil of a large watershed were to decrease, in its content of organic matter and cover of plant material, by 1 or 2 percent? What would this mean to the severity and frequency of floods and droughts?

Instead of addressing the cause, we seem to prefer to treat the symptoms. In the Northwestern U.S.A. we spend millions trying to keep roads open on slopes where annual grasses have largely replaced perennial grasses. Since the soil is less able to absorb and hold water, landslides are now frequent.

Water cycling, like other ecosystem functions, cannot be effectively managed with mechanical technology alone. It must be managed biologically. The following two videos help explain why water tends to follow carbon (biomass) in the landscape.

Note that the biological glue that Archuleta talks about in the second half, consists of carbon compounds such as glomalin that are one of the principal containers of soil carbon. The additional takeaway is that soil carbon, such as glomalin and other organic matter, sticky carbon-rich macromolecules, has huge leverage on the function of the water cycle because they create and maintain aggregate structure, which maintains porosity.

To enable Flash animations for this site, see these brief instructions: