Most of us have at least a working understanding of the terms arid, tropical, desert, etc. when used to describe landscapes or ecosystems. Brittleness, on the other hand, is a relatively little known measure of earth's environments.

Extreme non-brittle environments such as cloud forest or rain forest (low average rainfall versus high, respectively) benefit from the consistent activity of microorganisms, mostly in soils, that break down biological material throughout the year. Dead animal or plant material -- even massive tree trunks -- are processed quickly and incorporated into the soil so minerals are cycled at a relatively fast pace.

Sunlight energy stored by green plants also runs through at a fast clip. In non-brittle environments, dead material is rapidly converted to life energy for microorganisms. Humus-rich soil with very high percentages of ground covered by plants or litter contributes to high soil moisture -- needed by decay organisms -- and a very effective water cycle. Working together these cycles are like a well-rehearsed orchestra, once in a while an instrument may stand out; but mostly the sound is of one -- a whole. Large herds of indigenous hoofed animals are, interestingly, absent from non-brittle environments. About 1/3 of the earth's land surface is non-brittle.

Brittle environments -- those with irregularly distributed atmospheric moisture through the year, like deserts or grasslands -- experience large die-offs, or dormancy, of decay microorganisms in soils during dry periods. Dead plants may stand for years and oxidize to gray before microbes break them down. Trees may stand or lay for decades before they are incorporated into the soil. Large moisture-driven fluctuations in populations of microbial decayors slows all of the ecosystem processes in brittle environments. Minerals and carbon generally remain trapped in dead plants, stifling energy flow and mineral cycling.

Standing dead material also inhibits water cycling twofold: by capturing some rainfall above the ground where it is lost to evaporation more quickly, and by its absence from the soil surface where it acts to slow evaporation and soften the impact of rain. Rain pounds bare soil unprotected by litter (broken plant material in contact with the soil, much like a light natural mulch) into a hard cap. Capped soils are less receptive to rainfall, particularly in short, low volume events when water tends to roll off or sit on top of the soil until it evaporates. Have you ever watered a pot plant that became over-dried? The water rolls off the surface and down the inside wall of the pot.

Capped soils are also hostile environments for seedling germination. Seeds sit on top of the soil, so germination of new plants is inhibited. Those that do germinate may die quickly from drying as evaporation depletes soil moisture. Mature plants will then dominate the plant community. Two-thirds of earth's land area is brittle. 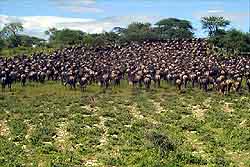 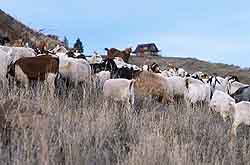 Brittle environments, though, developed over time with a way to compensate for periods when decay organisms aren't active. This remedy kept the ecosystem processes cooking. Large herds of hoofed animals behaving under the influence of large predators (bunching together for protection, trampling plants and churning soil in agitation) and migrating with the seasons processed billions of tons of plant material, composted it in their rumens and deposited it back on the soil. Their hooves broke soil caps providing safer havens for germinating seeds and good seed-soil contact. They chipped away dead plant parts from previous years leaving surface litter to shade and protect the broken soil, and incorporated some, building soil structure and placing organic material in closer contact with deeper soil microbes. Broken soil caps facilitated penetration of rainfall, and organic matter in and on soil improved water-holding capacity.

The degree of brittleness in a given area can provide a framework for predicting the impacts of various land management activities. Please see the other articles in this series (listed below) to learn more. 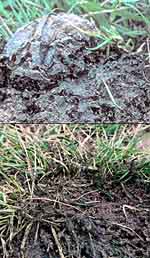 Christina Allday-Bondy is a Holistic Management Certified Educator in Austin, Texas, U.S.A. You can reach her at tododia@peoplepc.com, or phone 512-658-2051.